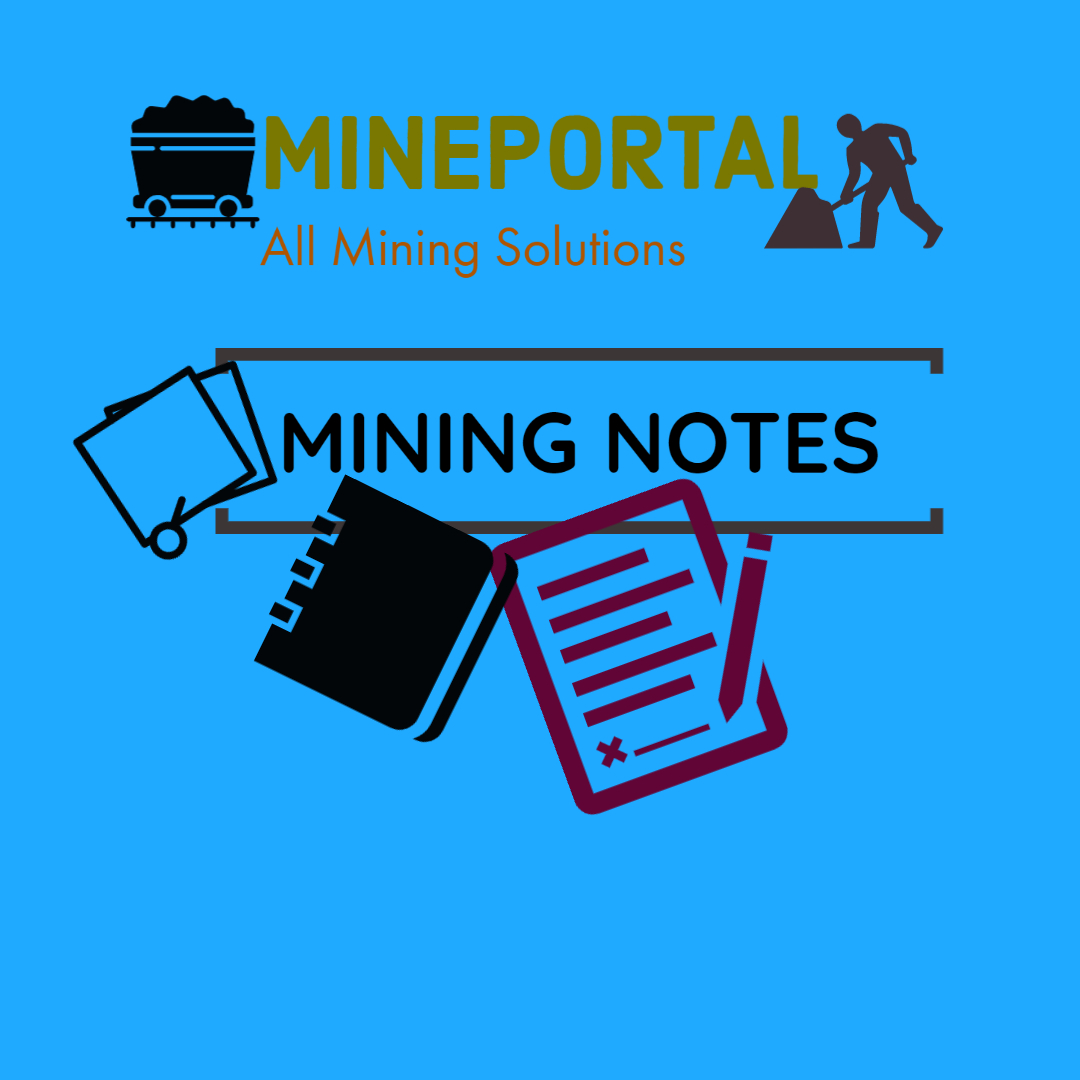 Industrial Fatigue : It is the physiological phenomena affecting a change in the natural organic function resulting in production of chemical product causing fatigue. (Fatigue:- the feeling of being extremely tired. (gehri thakan)

Fatality rate : It is the rate of which losing of life of any person in mine.

Forest Act : An act to a consolidate the law relating to forests, the transit of forest produce and the duty liable on timber and other forest produce. This act may be called Indian Forest Act 1927.

Miss Fire : Miss fire means the failure explodes of an entire charge of explosive in a shot hole.

Reporting Mine accident : Place of occurrence, how many persons are involved, limb of affected, it may be material to know which part of the body has been affected, using the safe devices receipment.

Permitted explosive : It means an explosive manufactured by such from and of such type as the chief inspector may from the time to time specify by notification in the official gazette.

Regional inspector : It means the inspector of the mines in charge of the region or local area or area which the exercised his power under the act.

Competent person : Competent person means a person who has attained the age of 20 years and who has been duly attained in writing by the manager as a person competent to supervise or perform that works of operating plant machinery etc.

Agent : Agent means every person whether appointed as such or not acting or purporting to act on behalf of the owner, take part in management, control, supervision & direction of mines.

Refresher training : Whenever a person refrain to employment on the surface or on opencast working or underground mine, after an absence from work for a period exceeding one year he shall with in one month of his joining duty undergo refreshment training.

Mine Plan : Mine plan include a surface plan or an underground plan a ventilation plan, water danger plan or a geological plan etc.

Accident : Conventionally any mishap in which one or more person are killed or injured constituents an accident. It may be defined as an unexpected event causing loss of life or body injury.

Bellman : Bellman means a person appointed to superintend the raising and lowering persons tools, materials and the transmission of signals at any landing.

Bank’s man : Bank’s man means a person appointed to superintend the lowering & raising of person tool & materials & the transmission of signal at the top of a shaft or winze.

Trainer : A person to be newly employed in a mine, while undergoing training in accordance with the rule considered only a trainers.

Working face : It means which place excavation mineral is done. It is the moving of any working place.

Stope : It is a solid or block or ore pillar which is under extraction.

Creche : Creche means a room with necessary accommodation reserved for uses of children under six years of age of woman employed in mines.

Creche nurse : Creche nurse is an woman undergoing a training as a chreche nurse at an institution appointed as crèche nurse.

Safety officer : In every mine the average monthly output of which exceeds 5000 tonnes, the manager shall be assisted in the work of promoting safe practices the mine by a safety officer.

Act : Act means is an act of the parliament. Which is provides provision for health, safety & welfare of the person working in the mines.

Assistant manager : Assistant manager means a person possessing a manager certificate appointed in writing by the owner, agent or manager to assist the manager in the control management & direction of the mine and who takes rank immediately below the manager.

Auxiliary fans : Auxiliary fan means a forcing fan or an exhausting fan used below ground wholly or mainly for ventilating a face or blind ends.

Blaster : Bluster means a person possessing a blaster certificate & appointed by the manager in writing to perform the duties of a blaster under these regulation & include a shot firer.

Committee : Committee means a committee appointed under sec-13 of the mines act.

Explosive : Explosive shall have the same meaning as assigned to that term on the Indian explosive act 1884.

Face : Face means the moving front of any working place or the in bye end of any drive level, cross cut raise or winze.

Landing : Landing means any floor or platform in a shaft or winze which is an authorized stopping place of the cage or other means of conveyor & includes a plat.

Machinery : Machinery means any such apparatus appliance or combination of appliances if any power developed stored transmitted converted or utilized thereby is used in connection with mining operation.

Manager : Manager means a person possessing the prescribed qualification and appointed in writing by the owner or agent to be in charge of a mine under the act and include a mines superintendent if appointed under sec-17 of the act.

Material : Material include rock, stone, mineral, ore or any other material.

Mining mate : Mining mate means a person possessing a manager, foreman or mates certificate & appointed by the manager in writing under any designation whatever to perform the duties of mining mate under the regulation.

Mine foreman : Mine foreman means a person possessing a managers of foreman certificate a appointed by the manager in writing to perform the duties of supervision or control in a mines or part there of and includes a shiftless.

Official : Official means a person appointed in writing by the owner, agent or manager to perform duties of supervision in a mines a part if there of and includes an assistant manager, an under ground manager, a mine foreman, a mining mate , an engineer and a surveyor.

Public road : Public road means a road maintained for public use and under the jurisdiction of any government or local authority.

River : River means any stream or current of water whether seasonal or perennial includes its banks extending up to the highest known flood level.

Roadway : Roadway means any part of passage or gallery below ground which is maintained in connection with the working in a mines.

Schedule : Schedule means a schedule appended to these regulation.

Socket : Socket means a shot hole or part or a shot hole remaining after being charged with explosive & blasted & which is not known to be misfired shot hole.

Tub : Tub includes a wagon, car, truck, hutch, bandy, bucket or any other vehicle for conveying material but doesn’t include a railway wagon.

Underground manager : Underground manager means a person possessing a manager certificate appointed in writing by the owner, agent or manager to be in charge of the whole of the under ground working or specific portion thereof under the direction of the manager & a mining mate & include an underground agent.

Working place : working place means any place in a mines to which any person has lawful access.

Trainee : Every person to be newly employed in mines while undergoing trainee in accordance with these rules, shaft for all purpose be considered only as a trainee.

Weekly day at rest : No person shall be allowed to work in a mine for obtaining mineral has been or being carried on.

Rest shelter : At every mines where more than 50 person are ordinarily employed adequate and suitable shelter known as rest shelter.

Mine : Mine means any excavation where any operation for the purpose of searching for obtaining mineral has been or being carried on.

Canteen : Mines rule 1955 has a provision under rule by that every mines where more than 250 persons are the ordinary employed, there shall be made a canteen by the owner and agent.

Surveyor : MMR has a provision under Reg.52 that at every mine a person holding a surveyor certificate of competency shall be appointed to be the surveyor for carrying out surveys.

Workman inspector : For every mine where more than 500 person are ordinary employed, the owner, agent or manager shall appoint a workman inspector. He should be the technical expert to carry out the inspection.

Register Keeper : Every person appointed to keep register or other records required by or under the act and the regulation and any end made there under.

Night shift : Where a person employed in a mines works in a shift which gat ends beyond midnight as known as night shift.

Railway : It means a railway as defined in the Indian railway Act 1890.

Apparatus for testing for carbon monoxide: In every mine of 2nd or 3rd degree they shall be kept at mine constantly available for use or more suitable birds or other detaching carbon monoxide. Carbon monoxide gas approved by chief inspector.

Shit firer : Means a person possessing a manager,  overman’s, mets, shot firer certificate & appointed by the manager in writing to perform a duties of shot firer under the act.

Duration Of Training For Different Categories